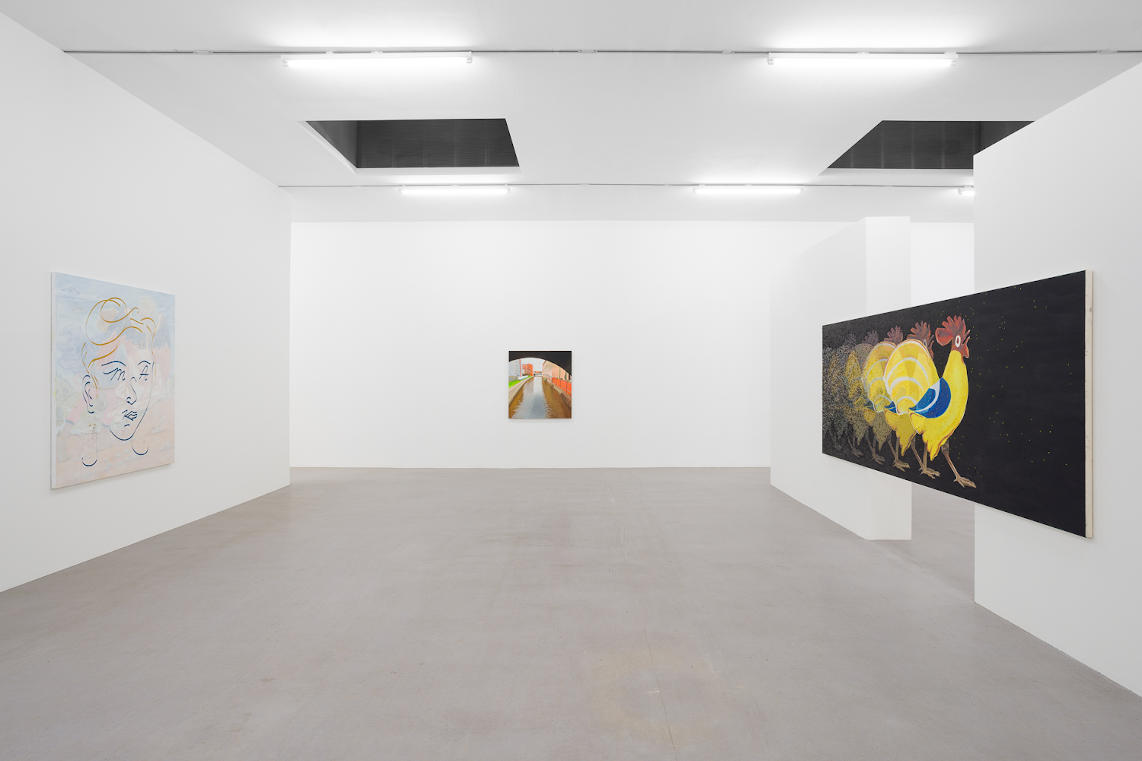 The Artery is the Mirror of the Soul

The exhibition opens with a lift. With two steps forward and a leap backwards, I realise it won’t let me in, the wall bricks won’t allow me. Ceci n’est pas un ascenseur. Ceci is an image. A photograph, I think, a painting, I realise when I take a closer look. The urge to stretch out my arm to grasp its non-depth is intense, childish naughtiness boils up inside me. There would be no harm, after all it is only a lift…

I look around, a window to a canal, pottery on the wall, a chicken crossing the road, why? One may only think it’s to get to the other side. As I walk through the rooms, I find it difficult to find the guiding thread that connects the works. If it weren’t for the unanimous expressiveness of the brushstrokes, I would say it was a collective exhibition. Few artists have such a diverse body of work, especially focused on painting.

Named Artery, the first solo exhibition in London of Canadian artist Allison Katz is at the Camden Art Centre. The power of the word Artery takes up more room than its biological meaning. It sounds like militarised artistic behaviour, a certain modus operandi, in stark contrast to the ambiguity of the works.

Arteries are doors to the outside of the heart. Artery is a manifestation from the inside of the artist. She refers the autobiographical character of these works created in the last two years. Needless to allude to the anomaly of this period, but the singularity of the works is inherent not to the time, but to the creator.

Of Dalinian nature, the themes are blurred between windows to the soul, memories and screenshots from the blink of an eye. Artery is about the “non-order of things”, says Katz. All this amongst cabbages, chickens and mouths. The peculiarity of peculiarities is one of Katz’s favourite materials, not oil, not acrylic, but rice. In several paintings, when you look closely, you notice that the textured surface is more three-dimensional than it first seems. The differences in colour and the pointillism are a result of the shadows and reflections of the rice grains. I describe it as a visually tactile sensation, succumbing only in thought to the urge to flick the grains off the canvas.

One of the concepts the artist likes to explore, thankfully assuaging the remorse of my childish instincts, is the idea of haptics. Touch and its relationship to painting. We’ve always heard that you cannot touch art. Katz is not giving us carte blanche to do so, but she is a master at creating that will in us.

Armed with symbols, Katz does not do anything by chance. Her works have several underlying meanings. In one of the rooms, five-panel paintings confront us with their mouths open. On the back of each is a cabbage. These works are very biographical, as the artist allows us to take her place, from the inside out. The mouth is a symbol of creative power, like a frame, it is used to enclose what we can only presuppose as desires, memories, glimpses. In one image, between teeth, we see an exhibition of undulating pink walls, with several paintings by the author, an exhibition within the exhibition – this inception moment was Artery’s promotional image, which made me think it was the real event. In each corridor, I peered out of the corner of my eye, waiting for the pink immersion that sadly didn’t happen. I chuckled behind my mask as the illusion cleared up. Katz is a genius in the art of deception.

Between tromp-l’oeil and surrealism, we see the rice again, this time on the roof of the mouth, open to show us a chicken. Katz says that one of the reasons she uses rice in her work is because of its symbolic charge when superimposed on other elements, at the base of the food chain or as a side dish. Or as a way to slow down the consumption of the image, making our eyes linger on the grains.

All the images are extremely intimate. The feeling of such a close connection with the artist is invigorating. All the images seem to have a direct dialogue with the viewer, asking consecutive questions. Artery is of rare beauty. It reminds us of the reason of things or the need to ask why, causing the childlike gleam in our eyes to reborn. In the ambiguity of detail, we are left floating in the magic of art.

Until March 25, at Camden Art Centre.

Postcards from the Edge

A Fine Arts graduate from the University of Lisbon, with one foot in London and her heart in Lisbon, she currently works in an art gallery in the United Kingdom. After going through the fashion world, she has revised her major interest in art. She is co-founder of Coletivo Corrente de Ar, which focuses on promoting emerging artists and democratising Contemporary Art. Her work is developed around curation, art consultancy and writing.