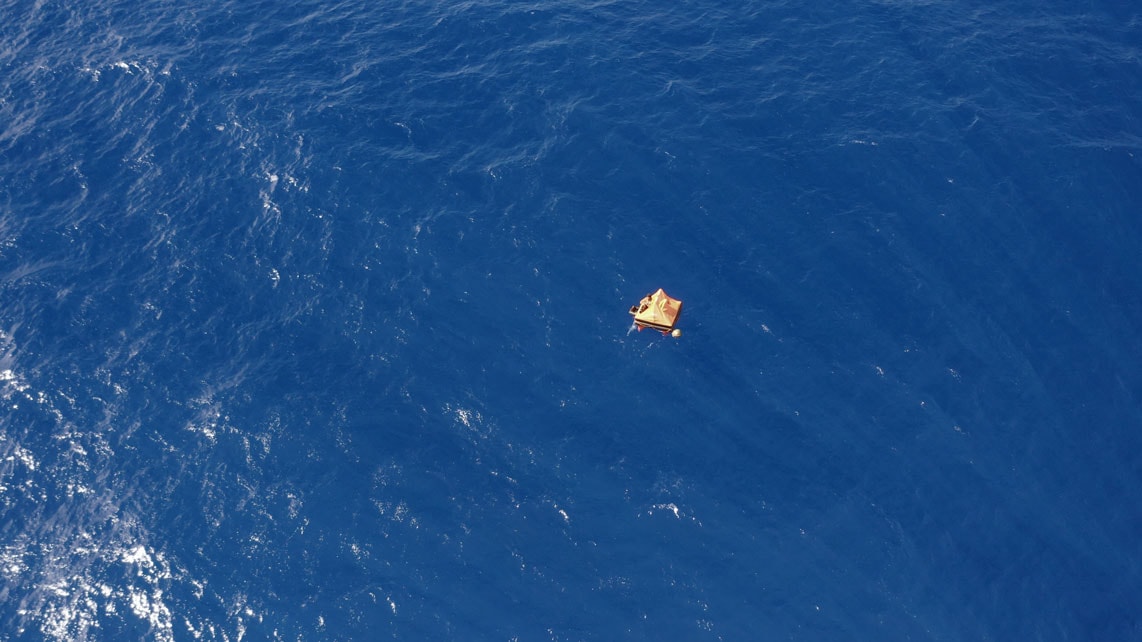 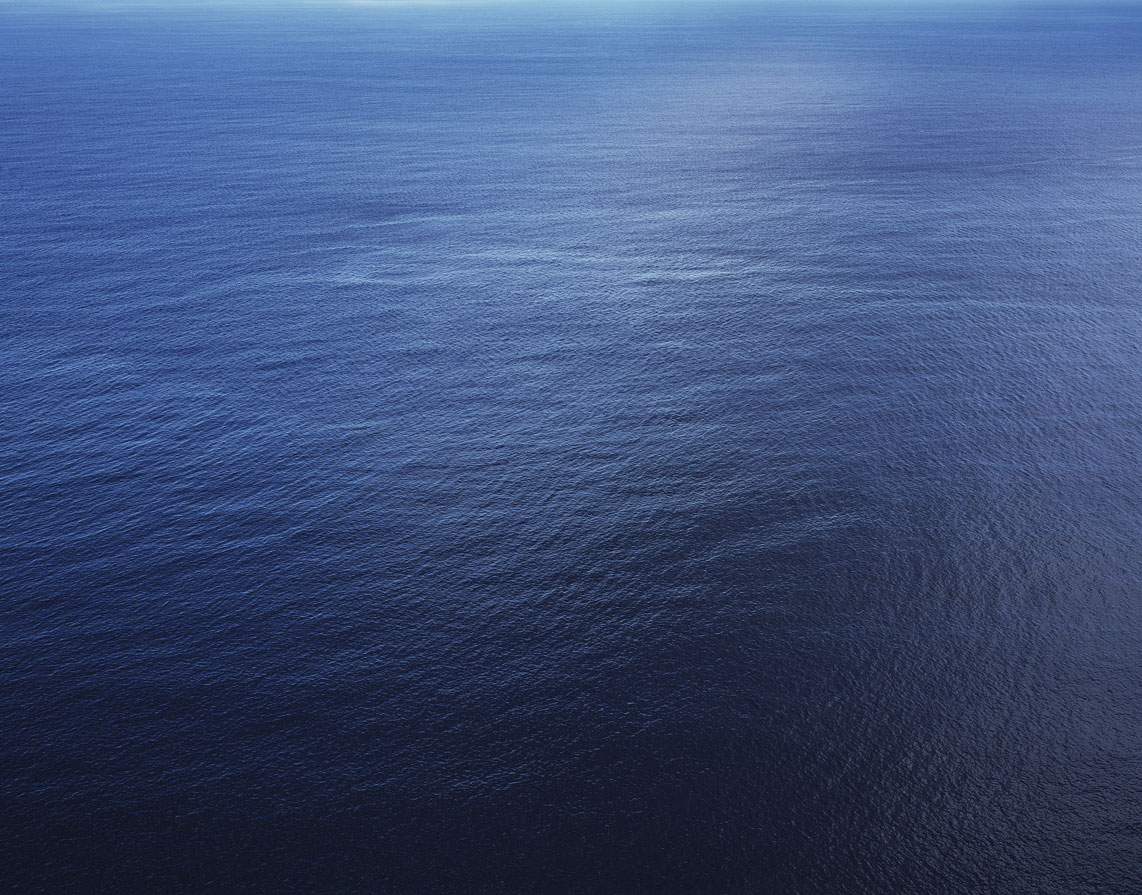 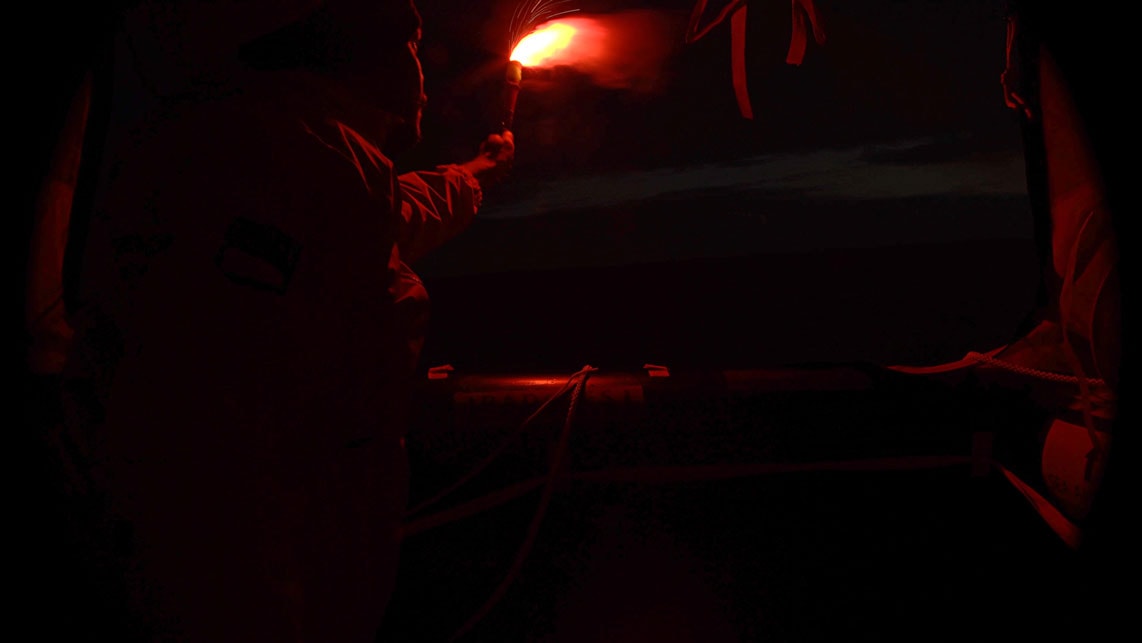 “Previsão de Deriva [Drift Forecast] emerges in the scientific method that the navy used to predict where a castaway is. Everything that falls into the water has a different wake. Based on the various conditions and type of vessel, a software can predict the location of the vessel to facilitate the search teams’ mission – that’s previsão de deriva”, says Márcio Vilela about a project in development since 2015, which led him to spend the autumn equinox on a barge off the coast of São Miguel Island. We talked to the artist about Previsão de Deriva, on a visit to his studio in Lisbon.

Margarida Oliveira – Walk us through the beginning of Previsão de Deriva.

Márcio Vilela – This is a work that started in 2015, initially thought to be conducted in the Berlengas Islands. I went there and we prepared everything. Permission was sought from the navy, I signed the accountability document and fulfilled all sorts of bureaucratic stuff. But, in that first experience, the barge had a technical issue. She started to lose pressure and I called the support boat by radio. She has a hand pump inside, as she naturally loses pressure, but not at that speed. I was using the pump, but she kept losing pressure and the ceiling had already collapsed, it started to look like a pool. The boat came and rescued me. Most of the projects I do take a long time to realise, even years. And I remember not being angry or disappointed because I had thought of this project in 2014 and we were executing it in 2015. However, there was something inside me that told me that I wasn’t mature enough to execute it. I needed more time. So, this 2015 project moved to 2021. And, now, that I have completed it, I’m aware that I would never have been able to do then what I did three weeks ago.

MO – Have there been any changes to the project since the first attempt in 2015?

MV – The project comes to fruition when the story is told in the exhibition. I entered the barge, grabbed a GPS, a small video camera and a polaroid camera. It’s not related to what I would have changed about the project, but how I would have dealt with it at a later stage.

MO – How did the idea for the project come about?

MV – I have always had a very strong relationship with the sea. I was born in a coastal town in Brazil. My family, especially my father, loved the beach. Every weekend and holiday, the destination was always the beach. The question was just which one. Since I was a child, I always surfed with my brother. Anyway, the sea was my happy place. I had the opportunity to do a project for Berlengas, at a time when I was looking for a feasible limit. That is, I was always looking for the maximum limit of what I could execute. Having this relationship with the drawing, without ever knowing how to draw, I thought I could use the barge as a drawing vehicle. At that time, the barge as a small metaphor also made a lot of sense. You decide many things, but deep down you don’t control your life as you think you do. The barge was the perfect metaphor, as I decided the vehicle, the place and the date. But, after getting on and setting off, she acquires a life of her own. I also had a great fear, which I found interesting: the fear of the sea. Being alone at night, with an unknown depth beneath you. Or you are aware of that depth and it’s even worse. In the Berlengas it was 5 km. I always lived in fear of whether I would make it. 95% of the people I spoke to told me that I wouldn’t make it: “you won’t make it, because you’ll get seasick”, “you won’t make it, because you’ll be afraid at night”. People were projecting their fears onto me. They were telling me the reasons why they had failed. When the first attempt at the project collapsed, I tattooed a technical drawing of a barge on my leg. I wanted to keep it visible so I wouldn’t forget, I wanted to look at it. My legs are all tattooed with future projects. It’s a kind of commitment.

MV – It was 56 hours. Three days and two nights. Interestingly, on the day of the rescue, I asked to stay longer. I wanted to stay another 24 hours, but they wouldn’t let me.

MO – They wouldn’t let you?

MV – One of the pivotal things about the project, from a security point of view, was the absence of control over the end of the project. I knew I might lose track of the conditions necessary to continue the project and end up making foolish decisions. And they were justified in picking me up. When I got off the barge, I couldn’t walk. After three days of lying down, I couldn’t stand up. I was not fully aware that my body was in pain. The initial plan was to be on the barge for 96 hours. The navy did not authorise more than 24, but I stayed 56. For me, it was very important to spend the night at sea, to confront this fear. At night, everything disappears and your senses are heightened. You hear, see and smell better. All your senses are enhanced. I used to go to bed around 11 pm and wake up at 2 am. That was my busiest time. I set sail on the September equinox, on a full moon day… it was indescribable. The night was totally clear, I saw the moon rising, going all the way around and I saw it setting at the same time as the sun was rising. I saw the moon, I saw the sun and I also saw the constellations in the sky.

MO – I imagine the experience covers the maritime aspect, the location, but the senses as well. The sound, the smell and of course the movement in the sea.

MV – Absolutely, it’s impossible to sit still for a second. I’ve never had seasickness, I only get seasick if I don’t sleep. When we left São Miguel, I didn’t sleep. I was living a moment of no return. We were on the boat, with a boat crew and a film crew recording a documentary made by Luís Costa about the project. I couldn’t change my mind. The pressure I felt made me get on the barge completely seasick. The barge was new and, when she was opened, she had an incredibly intense smell of rubber. When I got on, I thought I wasn’t going to make it. But that was the only time that happened. I knew I had to hold on for about thirty minutes until the smell wore off, to get the smell of the sea in. I lay down and did a breathing exercise. Nausea passed.

MO – Did you even get into the water?

MV – Yes, that was another fear of mine. Being in the open sea, three thousand metres deep, and the Azorean water has an indescribable blue – because it’s a volcanic island, there’s little sediment in the water. The rays of light project onto the water and we see everything. The first time I entered the water, my heart soared, I stayed for a while and went back inside the barge.

MO – We tend to be bystanders before a “spectacle” of nature. How involved were you with your surroundings?

MV – Everyone knew I was there. The fish seek the shade and stayed under the barge; the birds rested on top of her during the day. When I left the Berlengas on the punctured barge, she stayed on the water and the dolphins came out to look in. They were fully aware. I always ask permission to enter these places. I always have a deep respect and admiration. And it always goes smoothly.

MO – What was the distance travelled?

MV – 85 km. Previsão de Deriva emerges in the scientific method that the navy used to predict where a castaway is. Everything that falls into the water has a different wake. Based on the various conditions and types of vessel, the software can predict the location of the vessel to facilitate the search teams’ mission – that’s previsão de deriva. There was a prediction of where the barge would be, which will be shown against what actually happens. Those two drawings will be displayed.

MO – Do you think this experience has changed your relationship with the sea?

MV – The first time I went to the beach to surf after that, I sat on the board, in the sea, surrounded by people. I felt I had with me a secret of myself and the sea. I felt privileged like I was at my father’s house. The beaches in Brazil are incredible, but it’s white sand, hot water and coconut water. Here there’s that sublime thing, on the beach there’s rock and cold, we can feel the power of the sea.

Márcio Vilela presents us with an artistic research, which seeks the limit of creation and the limit of the artist. We look forward to the exhibition of Previsão de Deriva and Luís Costa’s documentary about the project.

Graduated in Plastic Arts – Painting by the Faculty of Fine Arts of the University of Porto. She is doing a master's degree in Criticism, Curatorship and Art Theories at the Fine Arts Faculty of the University of Lisbon. She is co-founder and editor of Dose magazine, founder of the space of studios for artists o.estúdio in Bonfim, Porto, and currently works as a plastic artist and freelancer curator.