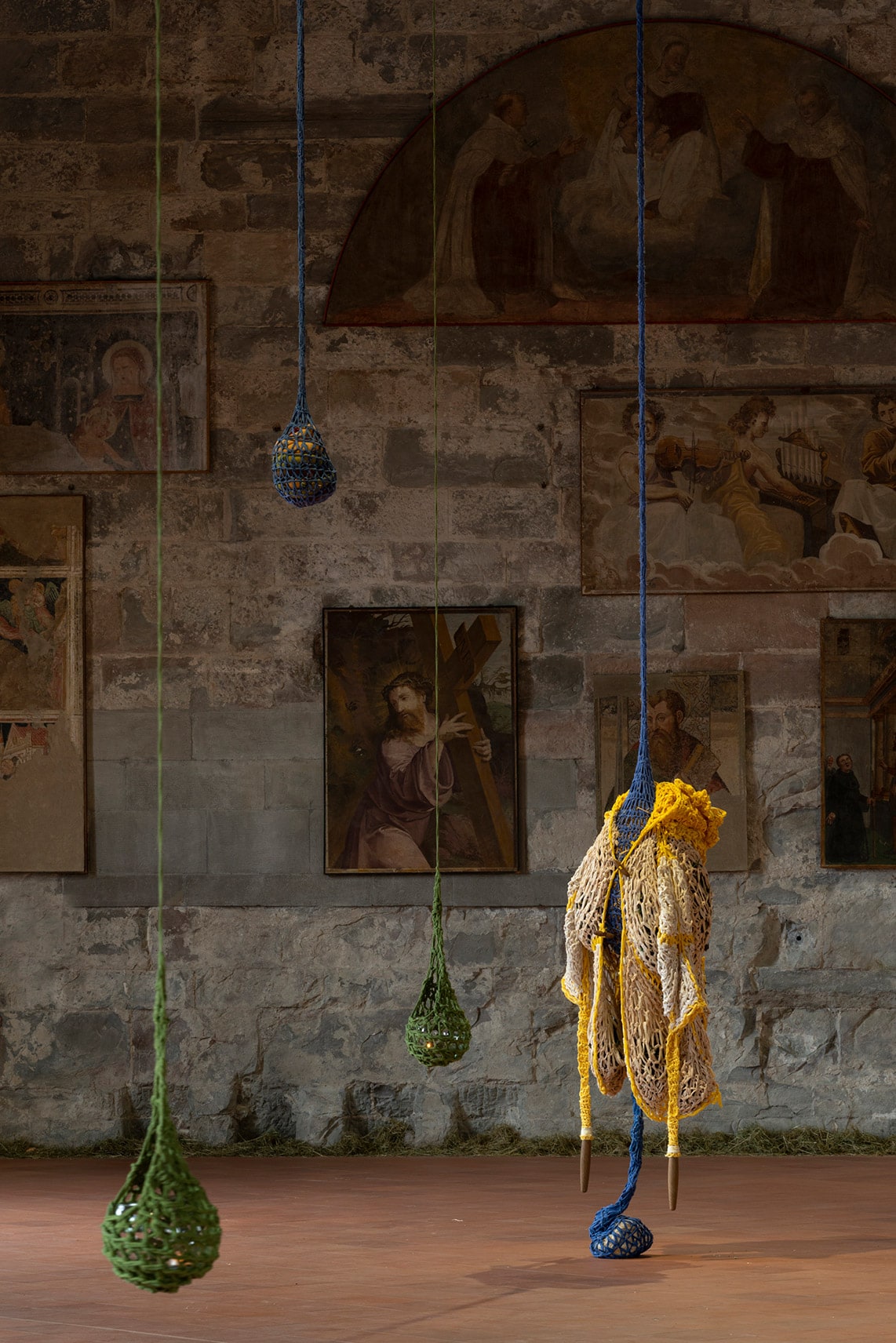 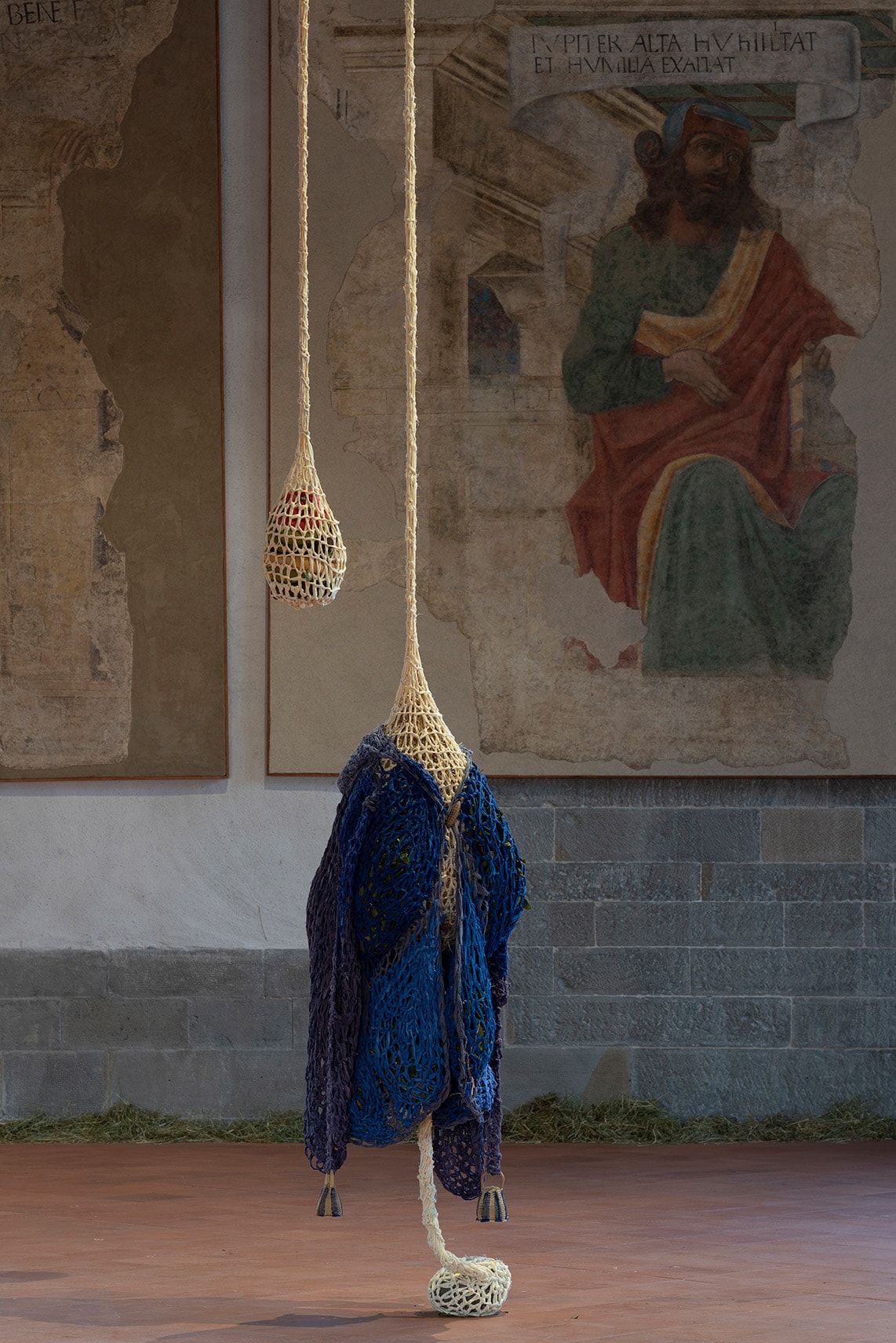 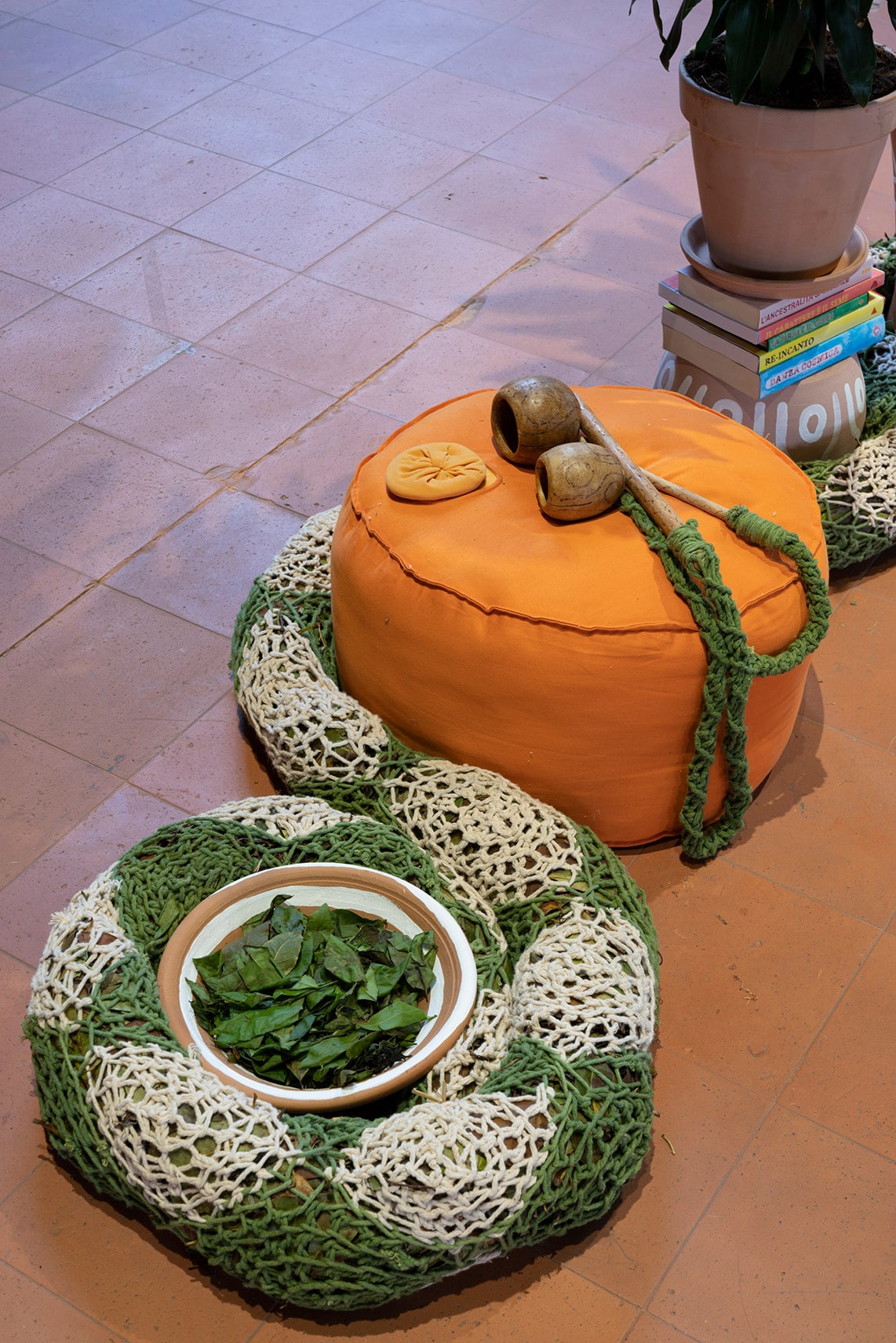 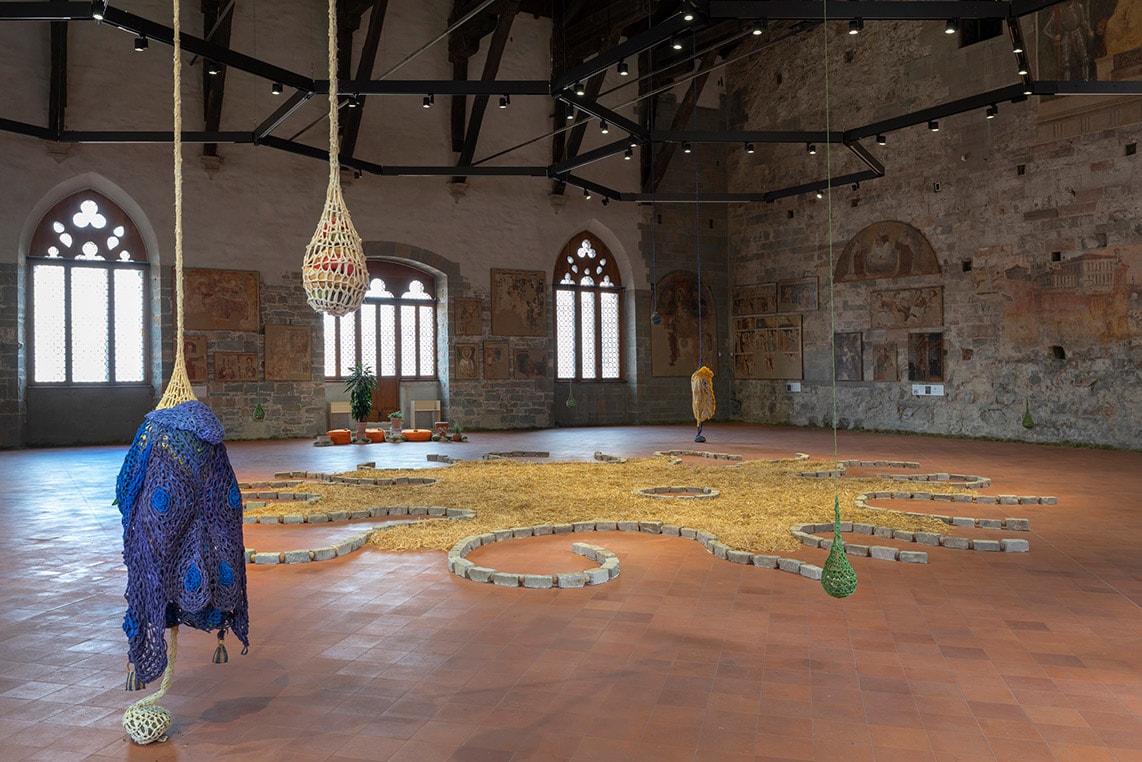 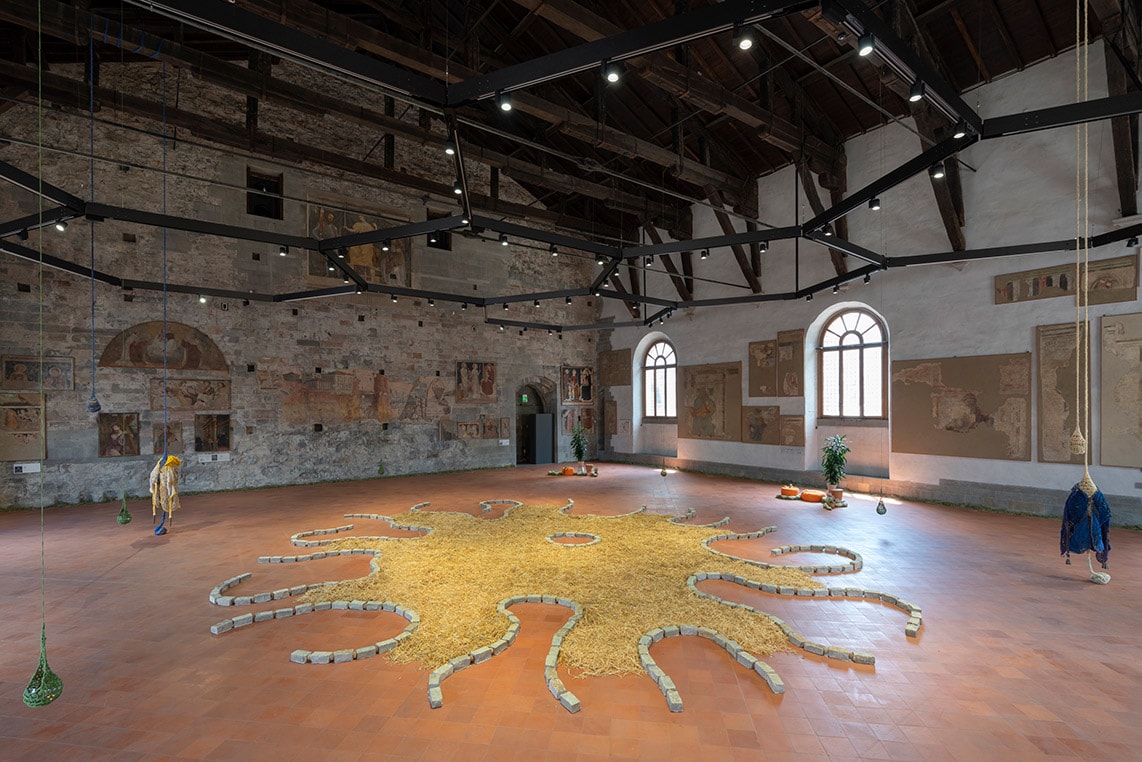 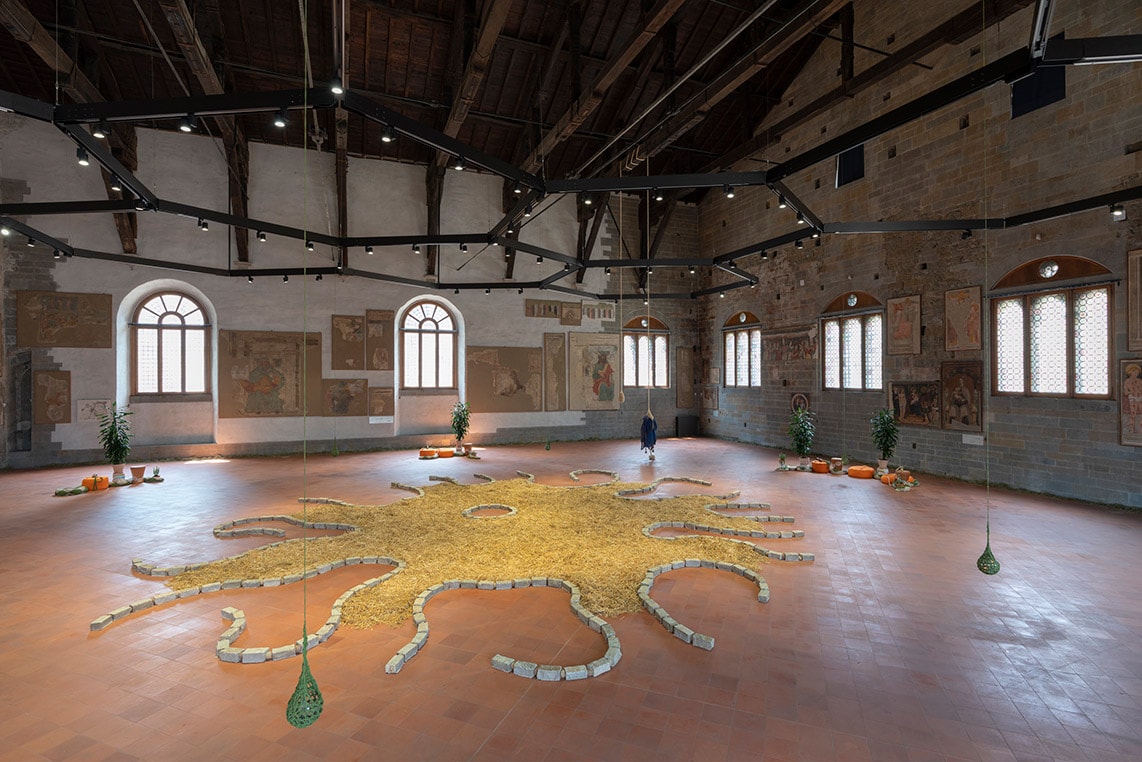 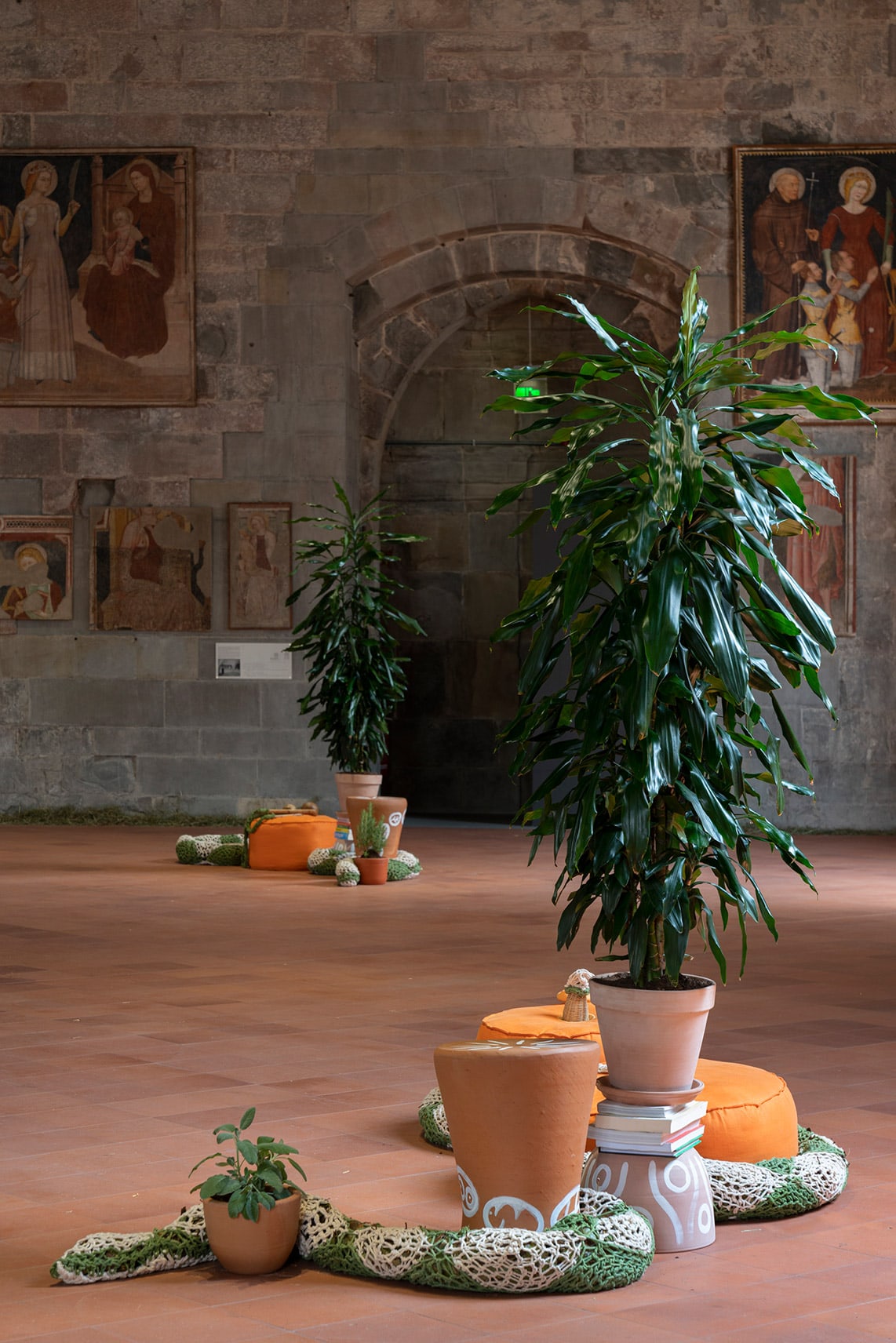 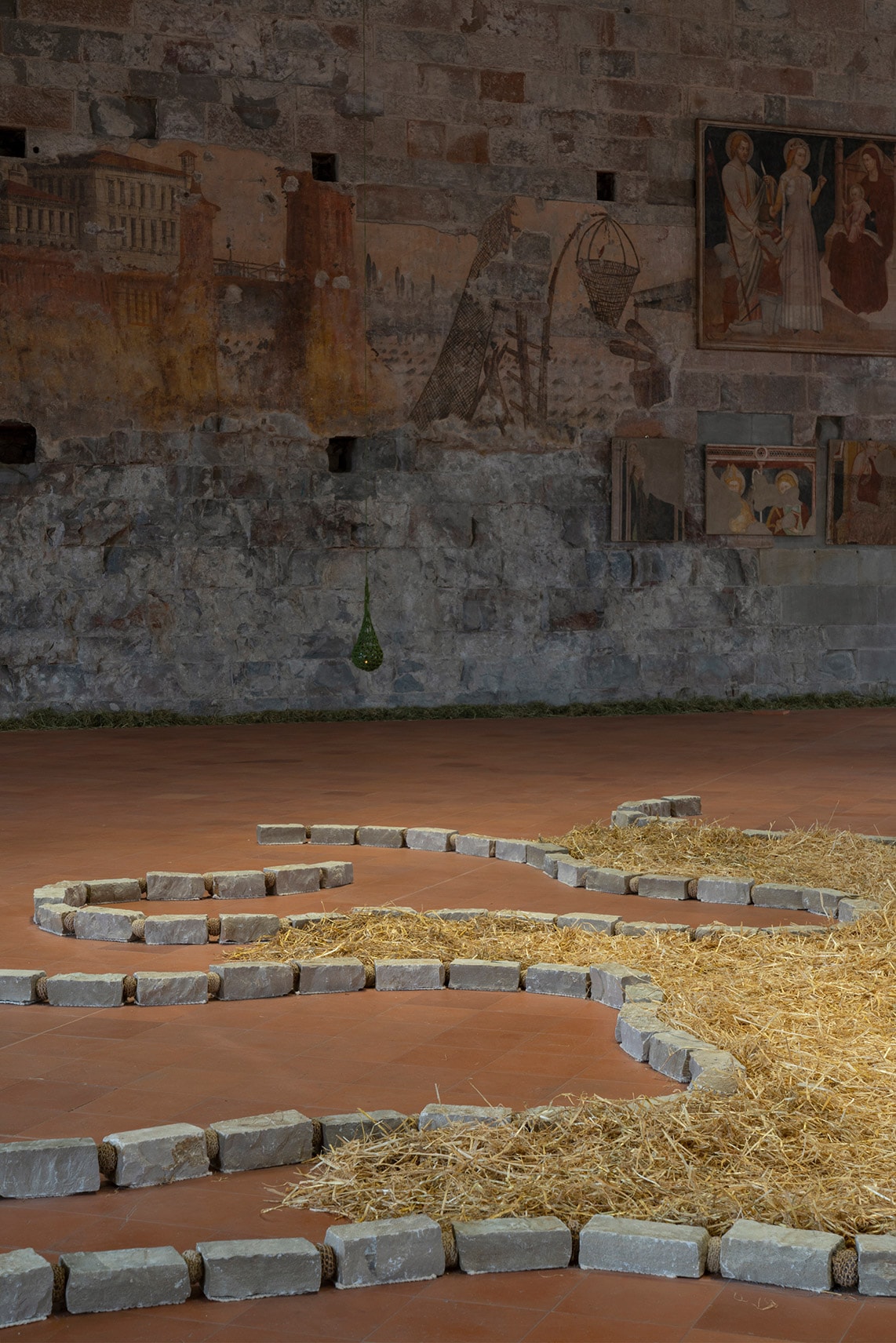 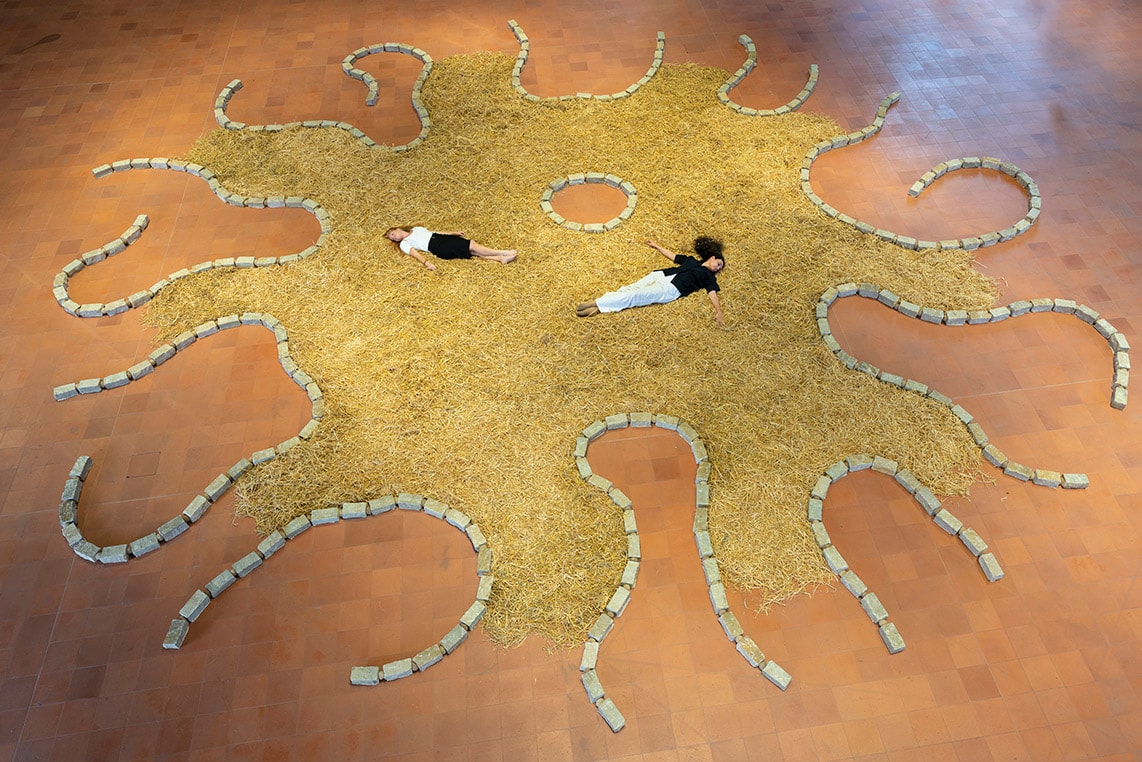 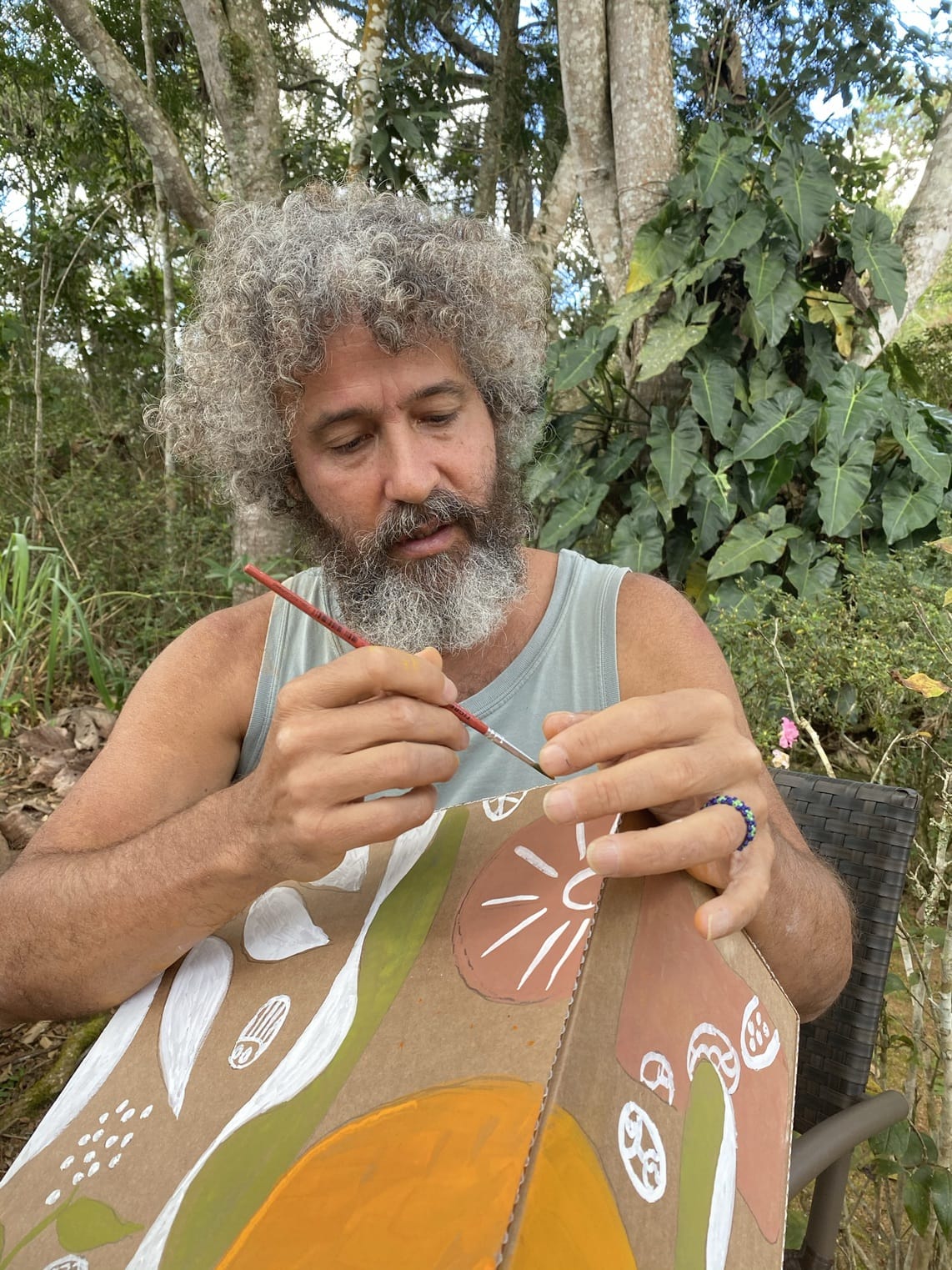 True to his languages, Neto made an environmental installation with natural elements: spices, small plants, straw, but also fabrics, book covers and bricks.

“Some time ago” – the artist tells us – “I stopped looking for inspiration by starting at the sky” – we remember his well-known habitable works with “suspended” forms – “now I’m focused on a new earthly dimension, more poetically associated with the roots, the feet, the seed that sprouts into flower in the darkness”.

Mentre la vita ci respira – SoPolpoVit’EreticoLe turns us into active visitors again. We can lie down on the floor and rest on a yellow heart that represents the sun, life and the octopus, a heretic animal and at the same time a metaphor for the pandemic period and the tentacular virus. We find, as always in Neto’s spaces, new connections between life and a form of art that depicts humanity intrinsically associated with nature.

Matteo Bergamini – First, I want to ask you how you are living this return to Italy, since your participation in the Venice Biennale 2001.

Ernesto Neto – I have been several times in Italy since the 2001 Venice Biennale. I did a show at MACRO, at Fondazione VOLUME, Rome, in 2008; and at Galleria Cortona, at the Brazilian Embassy, 2009. They were deeply special works, in addition to participating in some group exhibitions and, again, in the 2017 Venice Biennale.

MB – You have always worked with natural materials, devising environments where visitors can rest, relax. We can say that the presence of the human being completes your works. This last year and a half have not been easy for human relationships, which have become distant, hermetic… Have you noticed any changes in the public’s attitude towards your work in these last twenty years?

EN – That’s a very interesting question. Maybe we can analyze the evolution of society from that perspective. I have always thought that the relationship with the work shows something of the psyche of each individual. But there are so many variants that it is difficult to make such a time-based assessment. And I never stopped to think about it, since we always live in the present. But the variants are important. A show in a gallery is always remarkably different from a show in an institution. And between institutions themselves. Above all, they have a deeply varied audience in quantity and quality. Besides, each country has its traits: exhibiting the same work in London, in Tokyo or Rio de Janeiro is quite different. The audience always manifests itself differently, apart from the similarities. The curious thing is that we often try to see the differences more than the similarities! My work dances on the idea of uniting the similarities between people.

MB – Can you tell us how the Mentre la vita ci respira project for Palazzo della Ragione in Bergamo came about?

EN – Yes! When I started to feel the space, I was reading Caliban and the Witch (by Silvia Federici, coincidentally Italian) about the process of disenchantment of European society from the end of the communal lands, the control of the body, the repression of the feminine. At the beginning of the book, Silvia spoke of the persecution of heretics as the beginning of this movement in the name of progress.

Soon after, I read Pindorama revisited (by the Brazilian Nicolau Sevcenko), which talks about the mystical philosopher Gioacchino di Fiore, who tells us about his vision of Ancient Christianity as the figure of the “Father” and of the Middle Ages as the “Son”. According to the author, the “Holy Spirit” would be coming, where we would all be free, without rich and poor. Nicholas speaks of this moment as an epiphany that spreads throughout Europe, like “fire in the straw”, generating various heretical sects.

From then on, I don’t know what happens anymore! But when I encountered the photos of the Sala delle Capriate, in Palazzo della Ragione and, then, with my eyes closed in bed, near the pillows, with my body contorted, day after day, I began to see stone and straw as a dance. My gaze-body was glued to that encounter of the stone, already parallelepiped-shaped, with the straw. The stone that we take from the earth. The straw that warms, shelters, nourishes us. I don’t know how the magic happens, but the work was defining, dreaming itself. You know how it is: we just receive things and pass them on. The artist’s body is like a mediator!

Ahh, we also had the coronavirus – this heretical being, this living beast, not our brother, but our tormentor, where we are the household of its life, of something that hampers our breathing, which is our contact with Gaia – earth-life, mother-place, body-landscape – us, their world and them invading our world, asking: who are we? What are we? We were shown a yellow card as individuals and society. We are made of three trillion cells, with our DNA. A quadrillion foreign cells, microbes, bacteria, including different viruses, which we need to live. The cell, the beginning of life, all these things took me to the bottom of the sea, billions of years ago. That’s where this octopus-cell – SoPolpoVit’EreticoLe – came from, with its membranes-tentacles, snakes, constrictive boa constrictors, folds, lines, chromosomes, necklaces, sprouting day after day, one stone after the other…

MB – In your Bergamo project, you used materials found in the surroundings – stones and straw, fabrics and perfumes – to show a vision that for many years identified the “new world” in the eyes and according to the idea of the inhabitants of the “old world”. Today, what is your conception of the “new world” and what are the problems in it?

EN – The “new world” is the “old world”! It’s much older than the one we call the “old world”: an ancestral “old world”, fully connected with nature, with the living organism of the earth, with the grandpa Sun, the cosmic fireball, the Father of all life. The strong light from inside the Sun, with the enigmatic darkness from inside the grandma Earth-Water – this combination is the nourishment of plants, which generates the air, our food and the fauna: we, living beings!

This ancestry is indigenous, it lies dormant in us, but it’s still alive! It’s that estrangement from our family, from the animal and the plant, that all the pain, lamentation and greed lie. The texts deceived us, we fell in love with ourselves, we stopped being the centre of the world with the Renaissance; but culture, our products, our creative ability, our art, gave us again the idea of being the centre of the world.

We are beautiful like a flower, a lake, the wind, the mountain, the leopard, the dragonfly, the sun, and the whole natural family. Right now, the new “old worlds” show the drums of Africa, the songs of the Americas, the meditations of the East. We are much more than we think and much less than we externalize.

The “new world” is not in the light, in the Enlightenment, but in the darkness, inside, in the roots, in the feminine inside the earth, in the leaves, in each one of us… Starting from that darkness, we can find the light. The seed is born in the earth’s darkness: it grows in search of light, but it keeps its feet firmly in the earth, where the toes drink pure, divine, crystalline water.

MB – In your work, you have always paid attention to ecology, environment, recycling. What happens when themes become fashionable? Do they lose their ability to be mordant/sarcastic or important?

EN – In my work, there is always the theme of life, of being, of being alive here-now, of feeling life and time in this exact moment. When we affirm that power, that grace and that joy, we are whole.

What we can call “Western thinking” rationalizes life, separates, and classifies the environment, ecology, agriculture, physics, culture, etc. But this trend has a foundation and can dwell in us for a long time and can even transform us. The fact that these values are in fashion is because we are in a socio-environmental catastrophe. In the last fifty years, accelerated development has pushed us into an abyss.

When I was born, it was believed that the world could be destroyed in an atomic war. Now we see that we can destroy ourselves – not destroy the earth or life, which will continue despite us – simply our way of living. We are sold the dream that a good life needs to consume profusely (which is an addiction) rather than living simply and properly. That is, to be healthy, to have a connection with nature, friends, collectivity, spirituality. Yes, ecology is in fashion and fashion is part of the consumer society. But we are also experiencing a change of the Earth’s axis since 2012, so this trend can be the beginning of a major transformation: listening to cultures that have not been listened to for five hundred years. It’s time to listen to the earth, the drums, the flutes, the maracas, the breathing and meet with ourselves, think about the collective, hold hands and, who knows, take the gold from our fingers and recognize in it our ancestry and animality. Ahh, how I love fingers! They can teach. Much is said about cuca[1]. It’s wise, but the fingers are masters.

Matteo Bergamini is a journalist and art critic. He’s the Director of the Italian magazine exibart.com and also a collaborator in the weekly journal D La Repubblica. Besides journalist he’s also the editor and curator of several books, such as Un Musée après, by the photographer Luca Gilli, Vanilla Edizioni, 2018; Francesca Alinovi (with Veronica Santi), by Postmedia books, 2019; Prisa Mata. Diario Marocchino, by Sartoria Editoriale, 2020. The lattest published book is L'involuzione del pensiero libero, 2021, also by Postmedia books. He’s the curator of the exhibitions Marcella Vanzo. To wake up the living, to wake up the dead, at Berengo Foundation, Venezia, 2019; Luca Gilli, Di-stanze, Museo Diocesano, Milan, 2018; Aldo Runfola, Galeria Michela Rizzo, Venezia, 2018, and the co-curator of the first, 2019 edition of BienNoLo, the peripheries biennial, in Milan. He’s a professor assistant in several Fine Arts Academies and specialized courses. Lives and works in Milan, Italy. 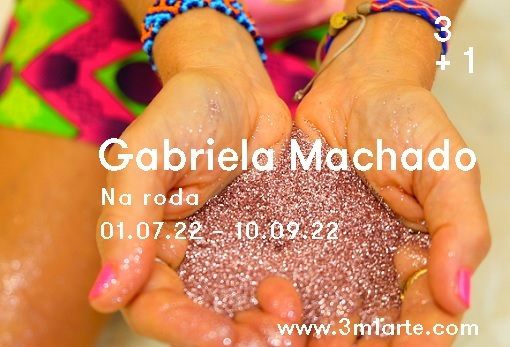 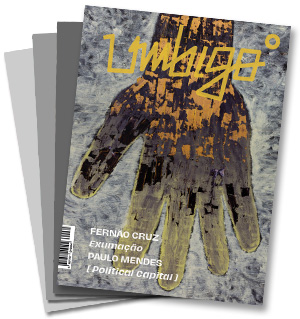