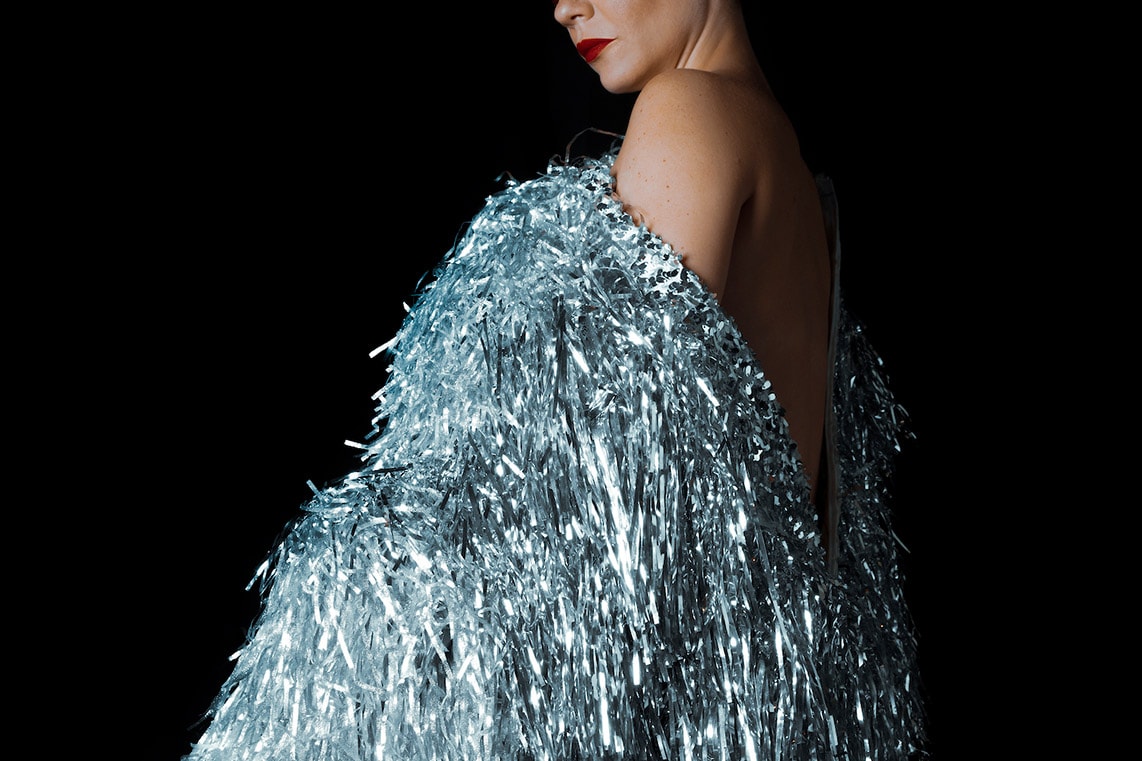 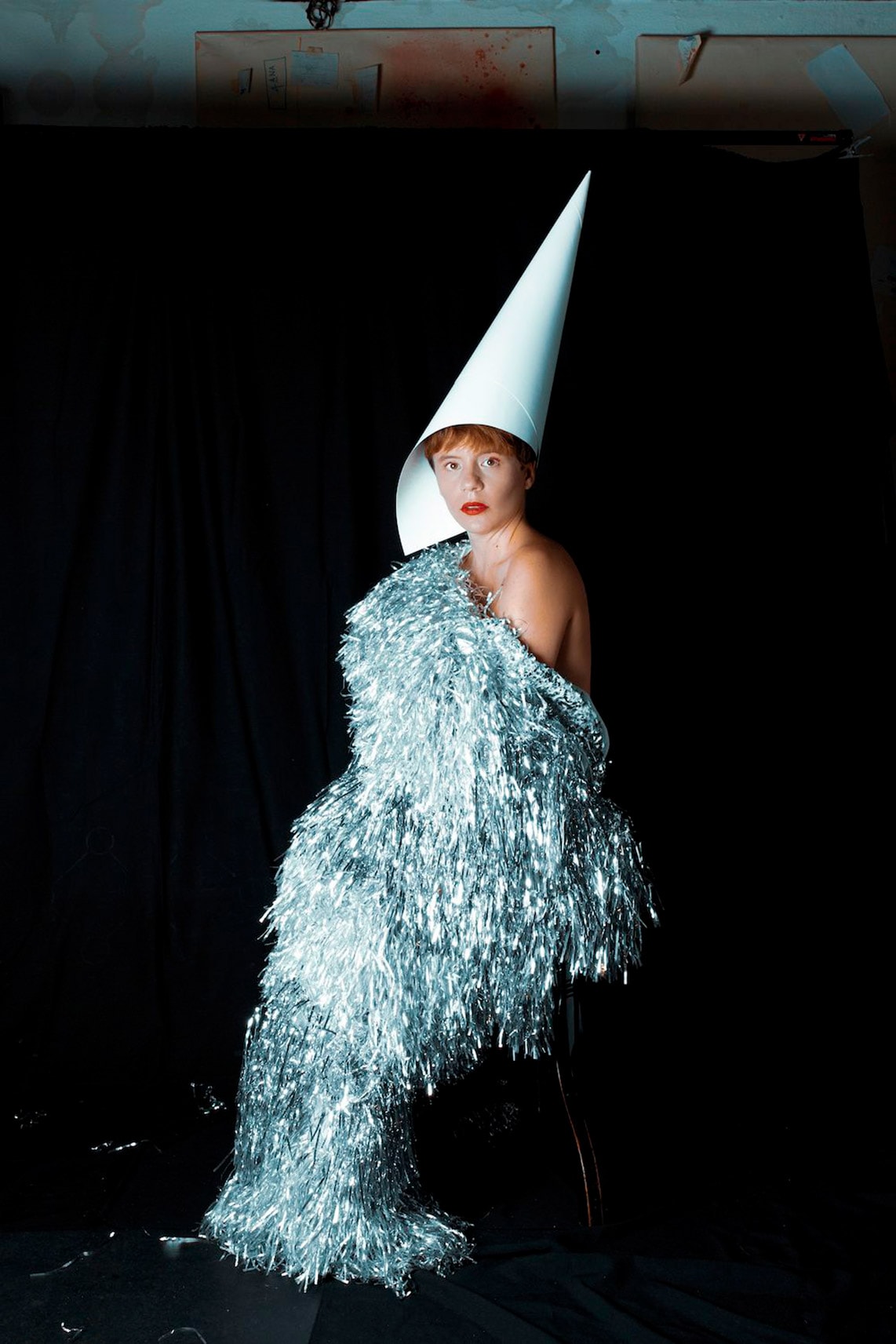 Plataforma285 is a multidisciplinary collective founded in 2011 to organize theatre performances. Its dramaturgy seeks non-theatricality and new creative languages, building realities inhabited by actors and not by characters. The collective works with a wide network of collaborators and associated artists. EmpowerBank is their new creation. It is part of the Temps d’Images festival, in co-presentation with Teatro do Bairro Alto. It premiered on November 27, having its last presentation at Lux Frágil on November 29.

The show starts with a melody played on Van Ayres’ Irish flute. This moment is brief, but marks emphatically the beginning of the action and/or the entrance to a different place. Then, a melody of synthesized sounds, which quickly gives way to an extremely fast footwork beat. At the same time, the other four actors enter the scene, in a row, and each one climbs to the flattened surface of a cylindrical platform. The scenic space is limited by a light blue rectangular perimeter with slightly elevated edges, suggesting the image of an almost shallow pool. This area is covered with raw corn. The actors are individually positioned on the sculptural platforms. They remain virtually motionless with their gaze fixed on the emptiness. The music changes and the performers start to speak to the melodic sound of a grand piano. The narrative of this discourse is always the same and is transversal to everyone: the satire of the neo-liberal “self”, manufactured through the union of Adam Smith’s ideas and the new age ideologies of the seventies and eighties. In the words of the company, EmpowerBank “is a show about the contemporary obsession with movements that promote the idea of salvation – from mindfulness to the “get to know yourself” experiences: “(…) The solution is a puzzle that is within. Take control of your life!”. The tone is almost always sarcastic and ironic, ridiculing the simplistic discourse of causality applied to everything, constantly based on clichés. The dramaturgy text contains neologisms and (apparently) random information, which further underlines the play’s ironic and sarcastic tone: “Given the cosmic conjuncture that runs through the minor arcanum of the Ursa Major, all may seem lost to you. Suffocation. No breathing. Recovery plans. Emergency pouches. A consequence of the times – we are nothing! But don’t let yourself be knocked out by your life (…) Empower me. Empower you. EmpowerBank. Power bank. Power in the bank. Money under the mattress. A mattress on the floor? No! No! No!”.

The action unfolds and the performers slowly move their bodies, freeing themselves from their static pose. The images that emerge from this movement relate to the verbalized text, without being a mere illustration of what is being said – on the contrary, the meaning and the signifier are constantly at stake. Music fills the space, stimulating the actors’ imagination, making room for movement. The movement gives way to choreography and, at a certain point, we see a score of well-defined actions. The choreography imposes rhythm to the action and the latter is always synchronized with the music played live. Besides enforcing rhythm to the action, the choreography stimulates the spectator’s attention, creating a tension in the scenic space. The audience focuses not only on the bodies in movement, but also on the spoken word.

Throughout the piece, several objects are used. These interact directly in the scenic space (e.g. the rakes used to sweep the corn on the floor), but also with the movement of the performers’ bodies (e.g. the brushes used during the choreographed actions). At certain times, these objects may be seen as an extension of their own body. More important than seeking a rational logic in EmpowerBank’s scenery and costumes, it is necessary to understand their plasticity. In other words, the scenery and costumes of this show are worked out in a plastic way, relating shapes, colours and textures with the scenic space and its performers. This comes from the influence of visual arts on the history of the performance and its methodology, of which Robert Morris, Robert Rauschenberg or Yves Klein are examples.

EmpowerBank is an artistic object that combines dance and theatre, the plasticity of the visual arts and the energy of the performing space, the sound foley and the spoken word. It appeals to the organicity of the scenic space and may be regarded as a moment of reflection. In Brecht’s style, the spectator is invited to position himself before what is happening, making a political or moral judgment of the action. However, the judgment is not about society, its classes, nor about the abstract idea of community, but about “us” and the “self” that inhabits that “us”. This piece criticizes the path that contemporary capitalist society is taking, scorning the kind of individuality it manufactures.

Postcards from the Edge

Testing limits in the gaps

Rodrigo Fonseca (1995, Sintra). He studied at the António Arroio Art School, has a degree in Art History from FCSH / UNL and a master's degree in Performing Arts from the same faculty. He organizes and programs the festival Dia Aberto à Artes (Mafra) and is a founding member of the cultural association A3-Apertum Ars. He was co-founder of the publishing house CusCus Discus. He is a music and performing arts critic for Umbigo (2020), ArteCapital (2021) and Rimas e Batidas (2022). He is also a resident DJ at the DARC cultural association, music producer and sound technician specializing in concerts and shows. 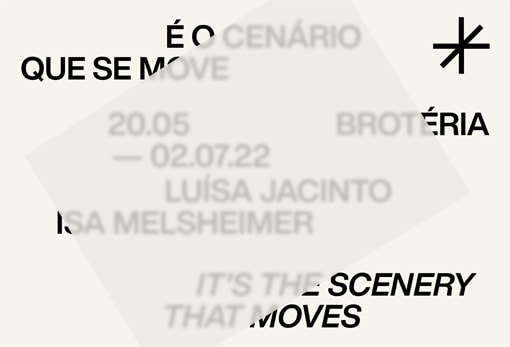