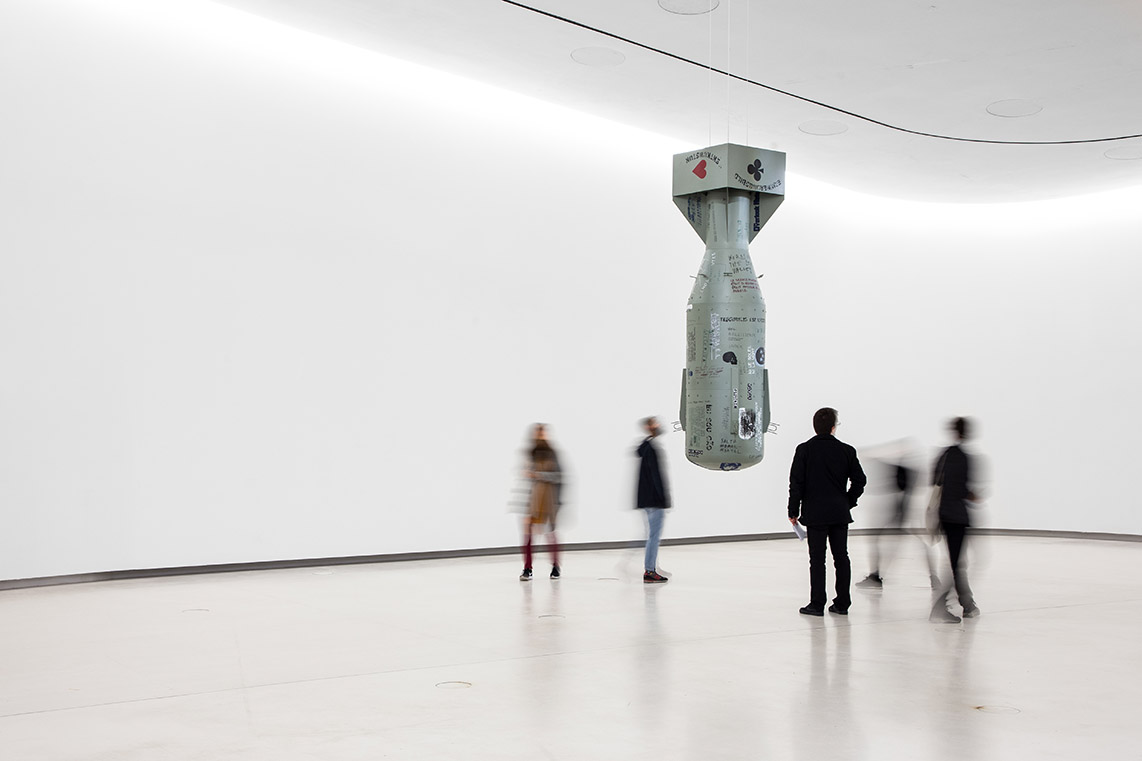 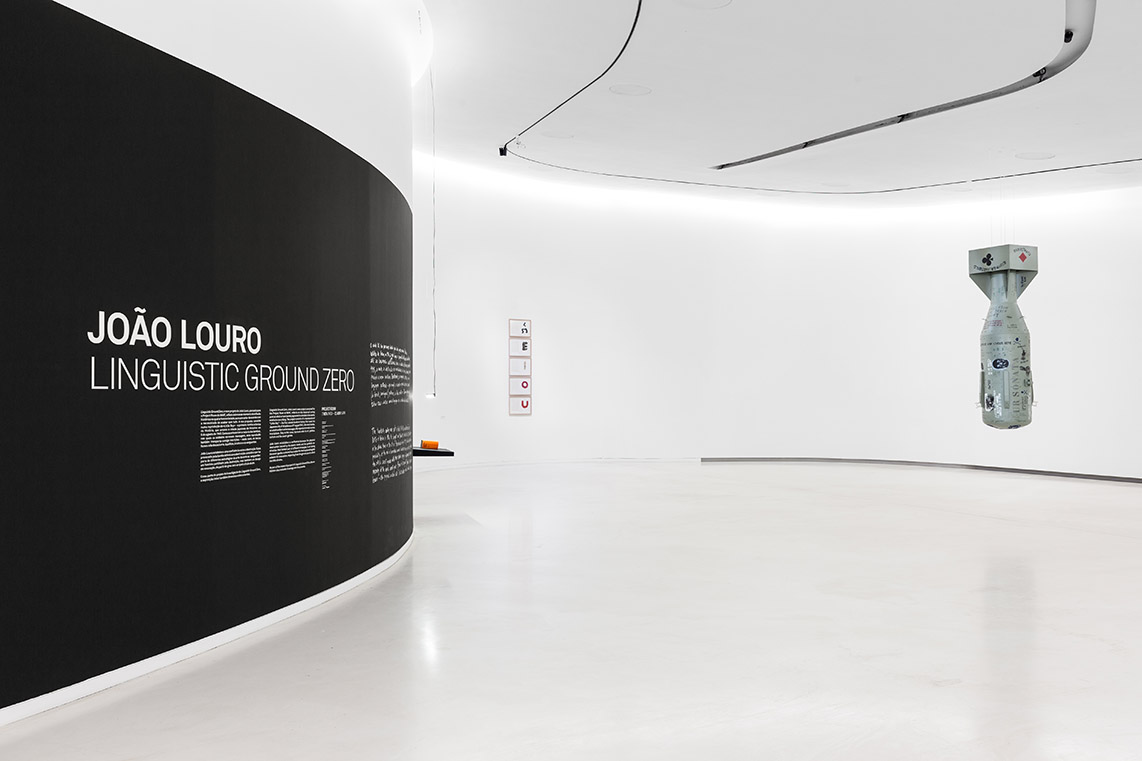 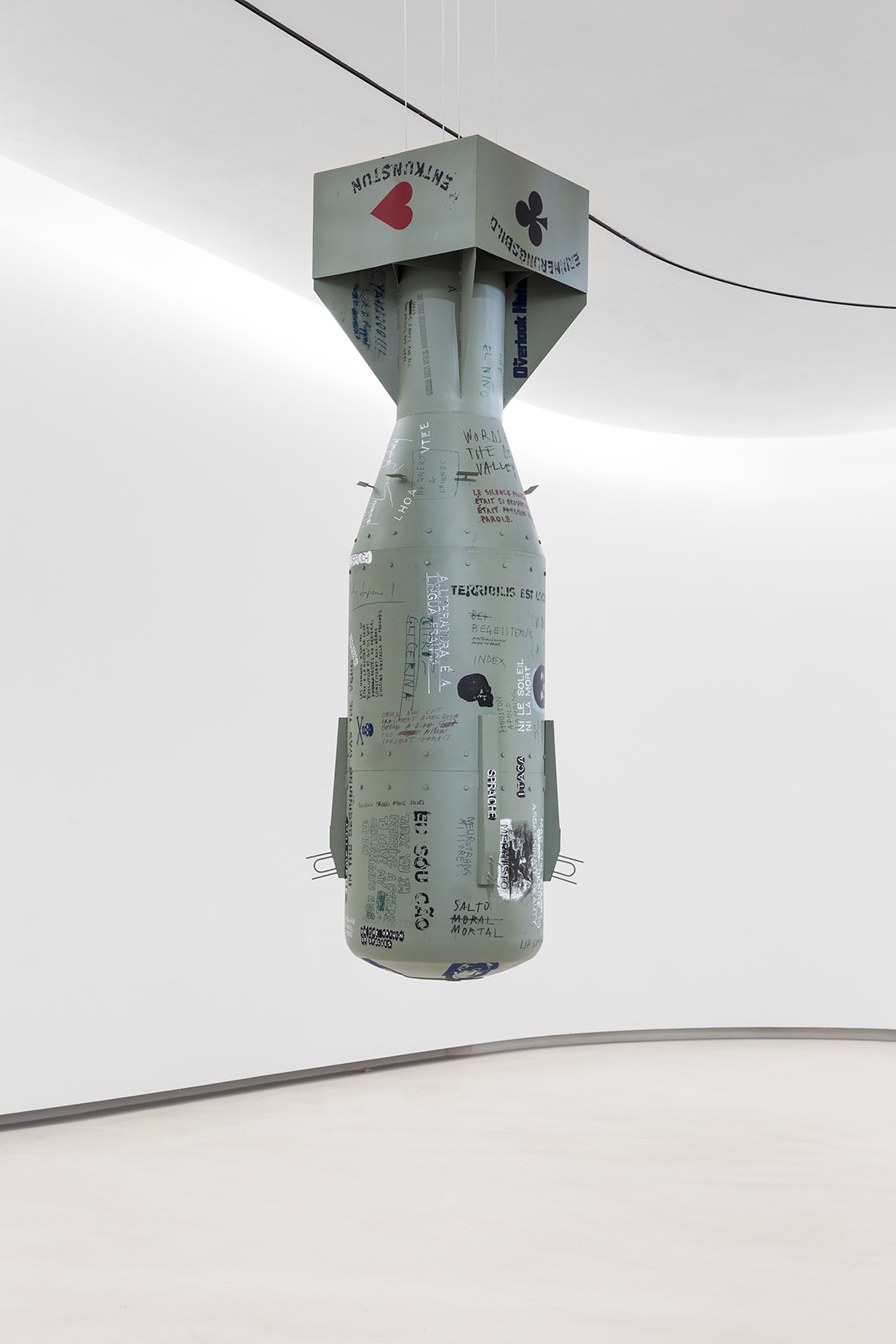 Nuclear energy has countless positive applications but whenever we think about it, we remember two events: Hiroshima and Nagasaki. Little Boy was the name of the first atomic bomb of all History, which razed with the Japanese city of Hiroshima on August 6, 1945.

The exhibition Linguistic Ground Zero, originally conceived for MAAT’s Project Room, starts with this premise: the destruction as a way of creating a new start, like a clean slate for something new and different. In this case, João Louro (born in 1963) think that artistic vanguards provide this clean slate so that something new can arrive. Thus, his reproduction of Little Boy has inscriptions, like the true bombs that have inscriptions made by soldiers, but these inscriptions have keywords related to the artistic world, poetical references, and graffiti. João Louro evokes, thus, a moment of destruction of language as we know it. If we think about how the Roman clean slates were wax boards that were scratched to get new inscriptions, this clean slate acquires precision.

João Louro studied architecture and painting and his work includes several art media, from sculpture to installation, including video or photography, frequently approaching the artistic vanguards as models change and of breaking with the instituted values. Louro works a lot with language and words, using strong literary references, namely poetical references, as well as musical or cinematographic references, all through a personal vision, which is also somehow generational.

The destruction of Hiroshima was the first time that Humanity understood the devastating effects of a nuclear bomb, and we only had this notion in 1952, when the Government of United States of America withdrawn the restrictions regarding disseminating the effects of the bomb, thus marking an entire generation, the Beat Generation. It was the first time in recent History that it was possible to have the notion that absolute and complete destruction is possible and can happen at any moment, due to human actions. It is the zero level of existence, the one in which everything dies. Only time allows rebirth and reconstruction. It is this process that is common to the artistic language, this slow reconstruction, which is sometimes late, and that, in the case of artistical vanguards, always happens as a rupture with the past. David G. Torres, the exhibition curator, considers that “we are also the child of explosion”.

Citizens of the Cosmos: Anton Vidokle at Espaço RAMPA

Interview with João Pimenta Gomes, author of Umbigo’s cover of the month

With a career in film production spanning more than 10 years, Bárbara Valentina has worked as production executive, producing and developing several documentary and fiction films for several production companies including David & Golias, Terratreme and Leopardo Films. She is now working as Head of Development and Production Manager at David & Golias as well as a postproduction coordinator at Walla Collective. She is also teacher at ETIC in the Film and Television Course of HND - Higher National Diploma. She started writing articles for different magazines in 2002. She wrote for Media XXI magazine and in 2003 she began her collaboration with Umbigo magazine. Besides Umbigo she wrote for Time Out Lisboa and is still writing as art critic for ArteCapital. In 2010 she completed a postgraduation in Art History. 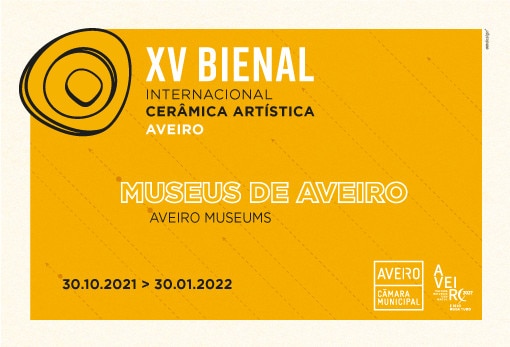