João Seguro, Out of the Corner of the Eye, October 2007 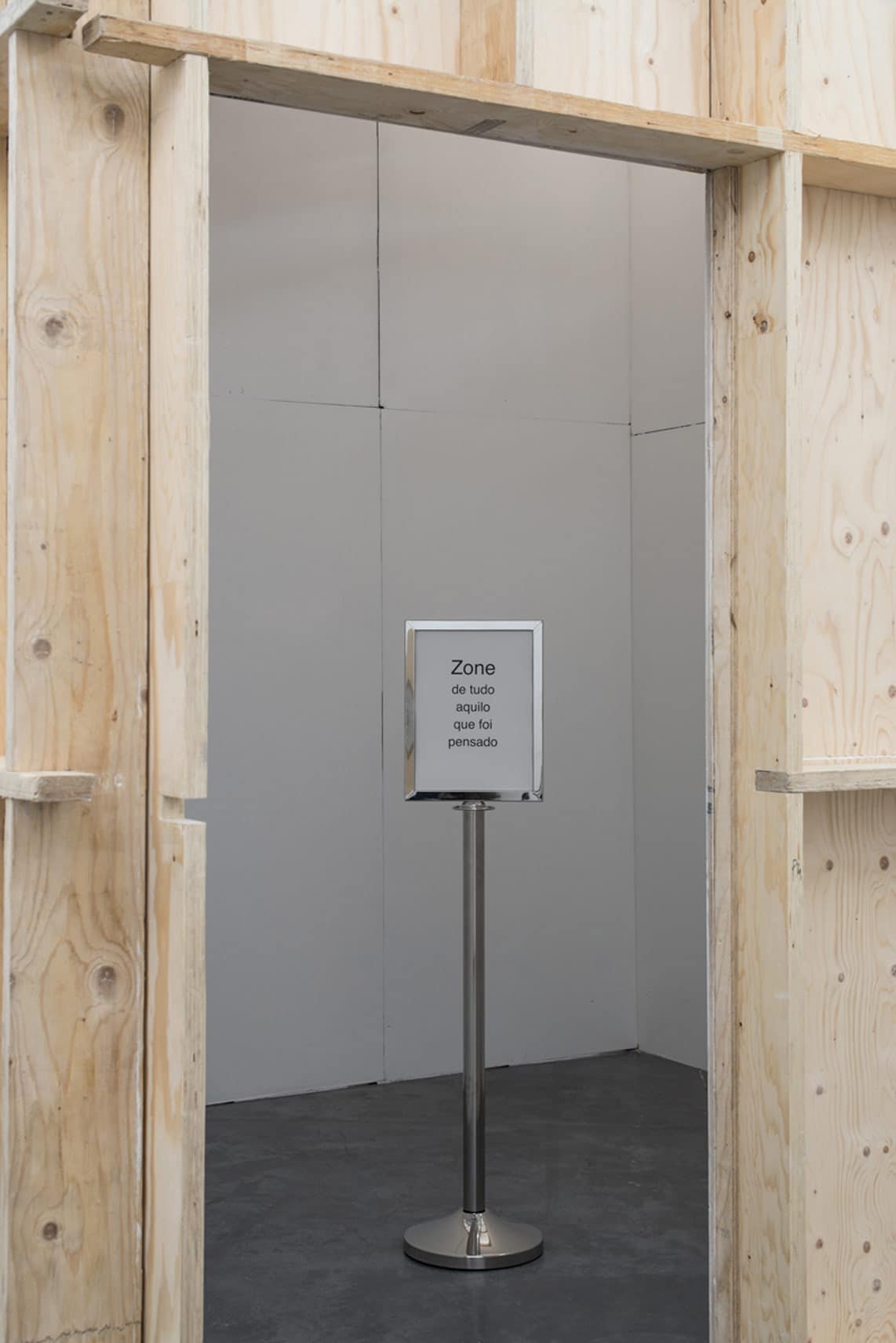 Created by João Silvério, EMPTY CUBE is a curatorial project which is now about to reach its ten-year anniversary. Over this period, a vast array of things have changed in the world of art which, more or less, is in tune with the fluctuations and volatility of the so-called real world. But EMPTY CUBE remains loyal to the original concept, with a regular and somehow dense programme.

Its nomadic trait adds value and interest, instead of subtracting anything at all, and is often a synthesis of what constitutes the hybrid platforms that stand for autonomy and independence in the art world. Ten years, in ambiguous conditions – not necessarily precarious –, is a great achievement for those who see in these experimental exercises an alternative to the institutionalization of museums or galleries.

The year of 2017 is, for that matter, a year of celebration for João Silvério, who has had a year packed with inaugurations of exhibitions commissioned by himself. From O Olhar de Sibila, at Museu do Oriente, to the many exhibitions that celebrate the 10 years of MACE, and also the recently inaugurated Ana Hatherly. Território Anagramático, at Fundação Carmona e Costa, as well as the commissions developed at the EMPTY CUBE, Silvério is now summing up his profession, his project and his curatorial discipline.

José Pardal Pina – The EMPTY CUBE has already undergone several different phases. In what stage is it right now, after having changed its premises and functioned as a nomadic project?

João Silvério – The EMPTY CUBE is, first of all, nomadic in its programme as a curatorial concept, because it did not commit itself to follow any artistic field, looking first and foremost at the working process of the artists in a confrontation with the conditions of the project itself. From the material, physical point of view, it went out to reach other cities, and also other spots in the city of Lisbon. Reaching non-commercial spaces, although seldom, like for instance in Tomar, Coimbra, Guimarães (European Capital of Culture in 2012) and Espaço Alcântara in Lisbon.

Right now, the EMPTY CUBE is gearing its action plan for the establishment of a publisher (a pre-existing idea), and will also continue to support the online projects that reach a diverse audience through emails. The Special Projects for EMPTY CUBE are solely conducted based on my exclusive invitations to national and foreign artists from different latitudes, and those will have a spot on the online page with a text about that work.

JPP – The installation room is one of the cornerstones of the EMPTY CUBE. How does one generate a program whose room changes on a constant basis? Aren’t you forced to review the programme given that you keep changing rooms?

JS – THE EMPTY CUBE rarely changed its location, due to a lack of financial resources. The initial one, in Travessa da Manutenção (lend by Galeria Filomena Soares) and the Appleton Square, in Lisbon, were the “headquarters”, so to speak, of the several projects conducted. When it comes to the programme, it does not have to endure that many changes, because the project has a time-based condition and a room can be in itself part of the work. From that point of view, it is not decisive. However, in local contexts which happen to be more decentralized, a one-night event causes, or has caused, some oddness, since one cannot come back and revisit that art project. But that is also happening in Lisbon.

JPP – The independent or autonomous projects, freed from museum rules, were, right from the beginning, deeply important in the manifestation and consolidation of alternative movements and forms of expression. Nevertheless, most of them have a short course and those who remain active for a long time undergo considerable struggles. 10 years is a long time in these conditions. How does the EMPTY cube live in a country where the money for the arts and culture is always scarce?

JS – That subject alone is enough to print a magazine issue, if you allow me that suggestion. The subject of government support is quite complex and often debatable. But I believe that is its nature, even though the situation is difficult in Portugal (and I believe it used to be harder), it is still very difficult because the projects have grown in size and the means have failed to follow such growth. On one hand, because we are not a rich country. On the other, because there is a systemic governmental negligence, and this deficient support causes an echo in the private sector, from my point of view.

It is not, I must say it again, a culture of subsidy mentality, rather a knowledge of the area and the field of work, in which certain projects are not profitable, do not offer an immediate return, even in terms of promotional image.

The EMPTY CUBE, due to its ephemeral and expectant nature, when confronted with an interesting project, has never framed itself within the parameters of the public tenders and even those of private institutions, like, for instance, having to have an annual programme to announce.

As for the decade of work conducted by the EMPTY CUBE, it has to do, above all, with the national and foreign artists who have presented a project that made sense. And, after a year during which the EMPTY CUBE had a private sponsor who did not want to renew its support, because the return of a project of this kind was not enough to promote the sponsoring company, I decided to go on with my own resources. But smalls forms of support also started to appear, in addition to the aforementioned logistical support from Galeria Filomena Soares and, then, from the Appleton Square. In other words, the EMPTY CUBE, with the exception of that year that I have mentioned, had no significant support. Those were sporadic, but very generous.

JPP – The project’s page displays a substantial list of artists with whom João and the EMPTY CUBE have worked. From a curatorial point of view, what lessons do you take from these 10 years?

JS – The list of artists is the history of the project itself, which was conceived to display their work. Given the intrinsic characteristics of it (and that can be read in the homepage’s brief text) each project is unique and depends only on the work of each author in cooperation with my curatorial function.

I can say that, from the production’s point of view, there were different levels of complexity, of difficulty, of execution. But, from a curatorial point of view, there has always been a narrow (I speak as a curator, the artists can say if that was the case) and productive work which has tried to respect and conduct the proposed project.

The diversity of contemporary creation, in the context of this specific project, is its structure. One of the lessons that I take is that the curatorial work is subjected to the artists’ suffrage, because their work is, in my opinion, the basis of ours. And, in the case of the EMPTY CUBE is, in fact, its essence.

JPP – Based on the wide vast professional experience that you have gathered, are you of the opinion that the curator has been an important project agent for the artists? That is, the curator as a catalyst of ideas and practices developed by artists?

JS – In my work as a curator with artists who are present, who are alive, I question myself a lot and I try to learn from their conceptual practices and methodologies. But also from the work’s surprise factor. I work with the artist, not so much about the artist. I follow the work process and establish a confrontation that poses a question. And when the curatorial work moves to writing about the work – which is always, from my point of view, an approximation – then there is a debate about the context in which the work can be lodged.

In another perspective, when one deals with the work of artists who are no longer alive, that dimension I was talking about is absent. But, since it is unrecoverable, I try, when that is possible, to look for other people to understand something that I miss in their work. Because there is always something that we miss, even subjectively, in the interpretation and intentionality underlying the work.

A curator may submit a proposal to the artist, an idea, but the catalyst element comes from the creative side, the sort of confusion that the artist proposes to us and instils in us.

And I do not believe that the curator is a pre-requirement for the artistic work. There are many individual and collective exhibitions, regardless of generations and processes, which are quite exciting and had no curatorship whatsoever.

JPP – Taking into account the short course of the proposals, is there any concern to document and record all projects to create the possibility of a time extension? As a curator, do the archive and the documents raise your interest and can they be a leitmotif for your work?

JS – Right from the beginning, THE EMPTY CUBE had a bilingual online page, so that everyone could have access to it. This is, from my point of view, an updated record, but also, as the decade went by, an archive, modest in what is visible, but one that can be consulted. And, within my possibilities, and from all those who helped in one way or another, this is a responsibility that I assume when it comes to maintaining and keeping several forms of documentation, in different media, such as models, and other physical and digital elements, which were decisive for each project which has to be conducted. This is the legacy that the artists, and other contributors, have left to project, which, one day, will be an available archive.

Dissonances at the National Museum of Contemporary Art – Museu do Chiado